Under The Sea: Researchers Explore the Idea of Radical Server System Cooling 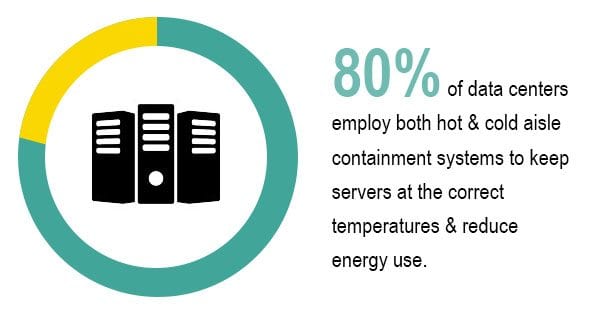 Temperature is a key factor in how effectively a network system is functioning. Due to heavy amounts of activity, servers are often prone to overheating. And because computers are becoming more powerful and compact, overheating occurs much faster.

To combat the heat factor, 80% of data centers employ or are looking into installing hot or cold aisle containment systems to keep servers at the correct temperatures and reduce energy use. The most common configuration of a temperature-controlled server rack enclosure allows cool air to pass through the raised plenum floor into the “cold aisle.” The cool air is then passed through the “hot aisle” before rising through the exhaust vents in the ceiling of the enclosure.

With the help of a well-designed cold aisle containment system, the data system operators are able to control problematic mixing of hot and cold air, as well as decrease energy costs and stabilize temperatures overall. While cold aisle containment solutions are effective, researchers have begun exploring a new, radical idea that could also help compact heat dissipation: putting them in the oceans.

According to Green Data Center News, two professors at the National Institute of Informatics in Tokyo, Japan have been experimenting with electronics cooling by submerging the electronic components. Michihiro Koibuchi and Kazuki Fujiwara have found that submerging the computers is effective in not only cooling them down, but also combatting environmental issues that pose risk in the data centers.

By waterproofing the computers, they could be set in water that is kept cool by a constant stream of fresh, cool water from a main valve.

Microsoft has already experimented with undersea data centers, which have proven to be successful despite their complex designs. The company has been using large vessels to hold the computers, as they are not waterproofed.

Iceland, also, has become a popular home to server farms because of its typically low temperatures. Although the system is imperfect, since not many people live there, the idea itself is entirely sustainable. The hot air that is emitted from the servers could be contained and used to heat Icelandic homes.

The ocean model is ideal, according to scientists, because nearly half of all humans live within 120 miles of an ocean. By placing waterproof servers in our oceans, instead of populous areas in hot climates, there is an effective method to both cooling the servers, as well as ensuring that they are still of use to most people and do not result in increased latency time.

While these oceanic cooling containments have yet to hit the market, cold aisle containment systems are still effective in keeping the heat dissipation low within data centers, and keep servers running effectively. If you’re having problems with your server overheating, or would prefer hot or cold aisle containment to reduce energy costs, contact AMCO Enclosures today.